— History of the oldest Soccer Club in Italy

Genoa Cricket and Football Club is the oldest football club in Italy, founded September 7th 1893 at the British Consulate of Genoa, and only football-based society still active among the seven that formed the Italian Football Federation (later F.I.G.C.) in 1898, is fourth in the ranking of winners of the National Championship (9 Scudetti) and boasts a long series of records and legacies.

The trophy includes an Italian Cup (1937), four international triumphs (2 Cups of the Alps in 1962 and 1964, 1 Cup of Italian-French Friendship in 1963, the Anglo-Italian Tournament in 1996) and multiple successes of early competitions (special mentions to the Palla Dapples and Coppa Lombardia).

The activities promoted at its origins was fundamental for spreading the practice of football and the values of the sport.
James Richardson Spensley gave great impetus in this area. Doctor and philanthropist, goalkeeper and captain considered among the founding fathers of our football and scouts in Liguria, was the architect behind the introduction to Italian members. The society has been part of the Pioneers Club since 2013, a body recognized by F.I.F.A., which includes the genealogical tree of the oldest clubs in the world.
The traditions of the club are traceable back to a myriad of events and names, stories and tales that have accompanied, beside the sports results, momentous transformations, changes of scenery and evolution of its customs. Genoa CFC, as a social phenomenon and community heritage in the quintessential byword for the city of Genoa itself.
The club holds numerous first-time achievements, some sports-based and others related to the club and life of the Genoan society and community. 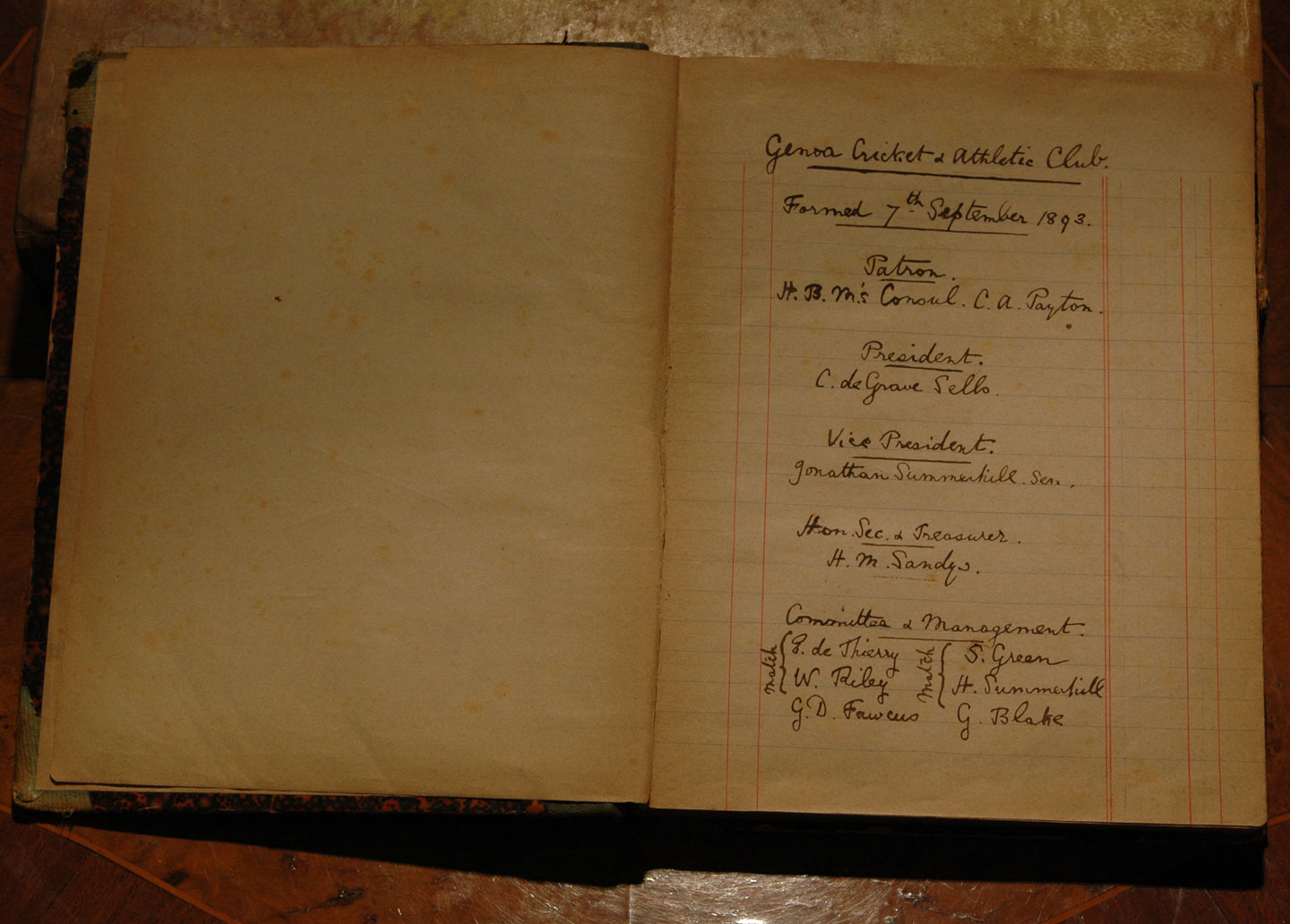 This project created by the Genoa 1893 Foundation ETS and the Genoa Cricket and Football Club originated from the desire to enhance the heritage and history of the Genoa Cricket and Football Club, through the evocation of its precious historical memories, celebrates the most representative and emblematic personalities, whose work helped build and consolidate the history of the oldest football club in Italy.

The 2013 edition marked the entry of 11 great names in the history of the oldest club in Italy in the Olympus of the Genoa Cricket and Football Club. The following are details of the 11 Hall of Famers 2013.

The Genoa Hall of Fame 2013 ended with the final Quality Jury’s vote that decreed the 11 winners. In its first edition, this initiative achieved a great amount of participation, attested by the 20,000+ votes gathered during five voting phases. The 11 Hall of Famers 2013 were revealed on the Ferraris pitch and awarded with the works of the painter Federico Romero Bayter, shortly before the whistle of the start of a symbolic game, Genoa – Naples.

Genoa goalkeeper from 1921 to 1933, with 19 appearances for the Italian national team. In July 1972 he received the Fronda d’Oro, a recognition awarded to those whom, either from home or abroad, honor the Ligurian land and its people. On December 9, 1979, the year of his death, the road that runs between the Bisagno river and the Luigi Ferraris stadium was named after him.
Defenders

He joined Genoa in September 1988, and even before becoming a footballer, he was a man of great personality. It was he who led the department and commanded operations. A memorable moment is his outpouring of joy on June 4, 1995 under the North Gradinata, after learning from the radio the news of the goal scored against Milan, in extra time by Padua, saved Genoa in the playoffs. After his death on 6 November 2002, his jersey number 6 was withdrawn by the club.

Having arrived at Genoa as a nineteen year old in the summer of 1985, he was noted from the beginning for his skill at marking and positional awareness; he ended his career, without interruption, in Genoa in 2000 (second place for both played seasons and for presences).

A right wing defender with great pace, he was the only great product of the rossoblù era Post-First World War, part of the formidable team that won two titles in the twenties. He played for the club from 1919 to 1932 and represented Genoa 21 times for the Italian national team.

Brazilian left-back arriving from Porto in November 1990, left his mark in the history of Genoa with a memorable set piece that gifted the “Popolo Rossoblù” a long-awaited victory in the derby. In the following two seasons, he was at that time one of the best free kick specialists and among the strongest players in his role world-wide.
Midfielders

The absolute record holder in the league playing with the shirt of the oldest club in Italy, in the Genoa – Pistoiese match (1-1) on January 20, 2002, he played his 511th official match with for the Griffin. Player with a great pace, he played his best championships between 1988/1989 and 1991/1992, but he is also noted for a later refinement of technique, which led him to play some games in the position of director.

Joining as a twenty-five year old at Genoa, he had a difficult start, culminating with a mistaken penalty in the Italian Cup against Rome in November 1990. Since the derby surprisingly won four days later he put himself forward as the leader of the Genoa midfield until, in 1998, with the winning goal from a free kick in his final “Luigi Ferraris” match against Padova, he decided to play for England in the ranks of West Bromwich Albion.

An Argentinean of a Spanish father and Italian mother, he played for Genoa CFC from the season of 1946/1947 to 1948/1949, in which he played a splendid set of matches, which had its most exciting moment in the 3-0 home win over Grande Torino. His left wing, Riccardo Dalla Torre, was the main beneficiary of his superfine technique and talent in the field.
Strikers

Arriving in the summer of 1989, “Pato”, a technical player with a small stature, immediately proved to be the ideal partner for the team-mate on duty (who paired with Skuhravy!) and was at the same time a deadly finisher. Unforgettable were his two goals in Liverpool when Genoa, on March 18, 1992, went on to victory, the first Italian team to do so at “Anfield Road”.

Produced by the rossoblù youth team, Pruzzo was a typical centre-forward of the penalty area, able to exploit the few spaces the tight player-marking left to him. After making his debut in 1973/74 with Genoa, he became, subsequently, the star of the rossoblù formation which contributed to its promotion to Serie A, reaching the place of honor as the scorer three places away from Ciccio Graziani. The following year, at the end of the championship, Pruzzo left Genoa forever to move to Rome, where he played for ten seasons, before finishing his career at Fiorentina.

In the summer of 1990 the center-forward of Sparta Prague and Czechoslovakia, Skuhravy, came to Genoa. A phenomenal header, the successful talent scored 15 goals in his first league without a single penalty kick. An incident during the summer preparation in the following season undermined his physical integrity, turning one of the best strikers in the world into a still excellent forward. He was by far the most voted for player in the 2014 Hall of Fame.
The Genoa Cricket and Football Club and the Genoa 1893 Foundation present the 2015 edition of the Hall of Fame. 200 rossoblù legends descend on the field. Only one will be the 2015 Hall of Famer.

Flag and symbol of Genoa CFC in the field, and today its director. Long-time captain, multi-purpose player of technical and physical ability. Extraordinary generosity. The club retired the no. 7 shirt at the end of his career, which began in 2003 and lasted for 11 seasons in three different positions. Due to his versatility he has been employed in almost all the roles.

In 1965 the Coordinamento club genoani was born, with its first headquarters in via Assarotti. Genoa’s support of the ‘60s became a mass phenomenon and marked the birth of dozens of clubs in the city and in Liguria. In the early ’70s the Coordinamento already had about 100 affiliated clubs. During a meeting, at the new location of the Coordinamento in Via Garibaldi, the idea of public ownership took shape – that is the direct participation of supporters in the management of the company.
The vicissitudes of the society’s management had a repercussion on the organized supporters. In the mid-90s the Unione Tifosi Genoa (UTG) arose, as an alternative to the Coordinamento, with about 20 affiliated clubs.
In 1999 the Associazione Club Genoani (ACG) was founded. The Coordinamento is dissolved and the UTG joins as a simple club to this new order of organized support. Currently the ACG, in constant growth, includes more than 200 clubs, scattered all over the world: 60 in Genoa, 30 in Liguria, 9 in Italy and 5 in the world. The activity of the ACG has developed on three fronts: the bringing together of fans, the maintenance of the relationship between the Society and Club, the conception and promotion of social activities.
There are also other clubs such as the Genoa Club San Fruttuoso, the Genoa Club Bolzaneto, the Genoa Club Lino Bonilauri and the Un Cuore Grande Così Onlus and Grifoni in Rete.